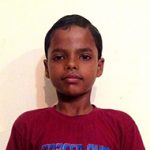 Like any other normal kid Uttam loves playing the puzzle games and cricket. His dream is to become a pilot one day. But what is not normal for Uttam is the environment he lives in. Staying in a slum, he has to witness a lot of violence every day. His father is a drunkard and he also sees men drunk every night walking around, fighting one another and vandalizing things around.  It is very unfortunate that a 12 year old boy has to see all these which is not at all healthy for any kid in their growing stage. He lives in constant fear of hooligans.

The only time he has a free mind is school time and the time he comes to Shiksha Rath. When he is in Shiksha Rath all he has to do is concentrate on his studies and enjoy the games. Even during the summer break, he does not want to stay at home, so he will make it a point to come Shiksha Rath and spent as much time playing his favourite puzzle games. Here he forgets the sight of his drunken father and neighbors. Uttam does not like to stay in the slum. He wanted to have a proper house of his own later when he grows and live a comfortable life.

What is encouraging for the Shiksha Rath team is his outlook of life even at this young age- study hard, become a pilot and have a proper comfortable house. The team is doing its every bit to lay a good foundation for Uttam and guide him the right way in achieving his dream. It is still a long way and a distant dream for both Uttam and Shiksha Rath team, but together we are taking one step at a time in helping towards achieving his goals and dreams.