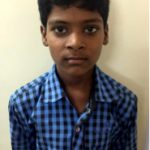 Sunil is a bright and ambitious student with a sweet nature and exceptional manners. Gifted in his studies, he has many friends, and is loved by all at the centre. His attendance had always been good, and so had his participation in class.

However, last February Sunil begun missing classes at Shiksha Rath. He seemed ‘lost’ when he eventually turned up, and his concentration was suffering tremendously. This change came as a surprise for the team. One day, on the pretext of going to school, he ran away from home. No one knew where he was, and his family were unable to contact him. Fortunately Sunil’s neighbour, an auto-rickshaw driver, saw him out on the streets, and picked him up and brought him back home. He refused to return to school, but did not mind attending the Shiksha Rath centre.

It seemed like Sunil was having some problem which he wasn’t sharing, and which his parents were unable to do anything about. However, sitting down with him (after several unsuccessful attempts) he begun to open up. He told us that he was being badly beaten by seniors at school, and that he dreaded the thought of going back. After finding out more about Sunil’s condition, the Shiksha Rath team went to his school and reported the situation to the principal. Since that day Sunil started attending school again, enjoying it as much as he had before in a matter of days.  Knowing there are people who care for him, Sunil is not scared of any bullies at his school.