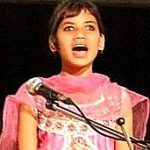 Rekha hails from Nepal. She came to India with her parents. Her father had already been working in India, and he brought his family in the hope of finding better living conditions. However once the family reached India, he left and never came back. The family of four – Rekha, her mother and two younger siblings – were left alone in the slum of Outram Lines, Delhi. To support the family financially, Rekha’s mother begun a job cooking in other people’s houses.

Being the eldest child, Rekha must take care of both her siblings and the house when their mother is out working. Because of this Rekha cannot attend classes regularly. A very bright student, and with a lot of potential, she was unhappy about missing so much school.

However, relief came when she joined Shiksha Rath. As an after school tuition centre, she was able to attend the classes in the evenings, when her mother is home and when her two siblings are also at Shiksha Rath.

Besides being a bright student, Rekha also sings very well. Noticing this talent the Shiksha Rath team encourages her to practice and perform whenever there is an event on at the centre. During a community event organized by Shiksha Rath, Rekha and her brother sang a Nepali folk song. Seeing her child performing on stage, her mother cried out of joy. And as told by Rekha, her mother hugged her after the performance and it was the first time she got a hug from her mother.

It is overwhelming to see kids performing better in their studies, and flourishing because of Shiksha Rath. However, it is even more encouraging and heartwarming to know that families are getting closer because of the efforts of our organisation.