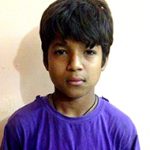 Eleven year old Azam is a boy full of unique characters. He would come to class with his collars up, his sleeves pulled and walked like he is the boss. He has this unique habit of not sitting in the class; he stands and listens to the teacher. We mistook him as arrogant and stubborn at first, but he turned out to be just the opposite. Azam is not a trouble maker but is obedient and attentive in class. A natural leader, he would monitor the class efficiently whenever the teachers asked him to.

Azam’s passion and determination to learn was revealed more on the day of tuition fee collection. Each kid is expected to pay rupees 150 per month for the tuition. Azam came with just a hundred rupee note. When asked for the rest of the fees, he replied that he will pay back when he gets his salary. We found out that he earn his living working in a mechanic shop after school, then come to our tuition and goes for his extra mechanic class in the night. We did not feel like taking his earning away so gave back the money and told him he need not pay his fees. But to our surprise, the next day he came with the full fees and insisted that he pays for his tuition even though there is not much left for his needs.

We are amazed and excited to see how Azam has changed since he came to Shiksha Rath. His shirt collars are down in its proper place, his sleeves are neat and he himself said that his talking manners have improved a lot and Azam is happy to receive good education in Shiksha Rath.

It is disheartening to see how kids like Azam had to work at such an early age. But it is overwhelming knowing that Azam knows the importance of education and that he even insisted on paying his own tuition fee. Shiksha Rath is proud to teach such kids and doing every bit to provide them the best education that will help makes their future bright.