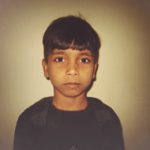 Ankit is nine years old, and has been coming to the Shiksha Rath centre for nearly four years now. A naturally talented artist, Ankit shows a real flair for painting and drawing. Any blank space can become his canvas: usually that’s paper, but occasionally it’s a table or the wall… His favourite cartoon characters are Chota Bheem and Doreamon. Ankit is an immensely well-natured individual, and demonstrates talent across all his studies. He routinely impresses Shiksha Rath staff with his ability to concentrate and immerse himself within a task. He recently completed a tricky 636 piece jigsaw puzzle, which had left some of our interns stumped!

However, one day Ankit stopped showing up to Shiksha Rath. It transpired that his mother did not want him going to class anymore, for reasons best known to them. A short while later he reappeared, and told the teacher that he had come back on his own initiative without his mother’s knowledge. Concerned about this, Shiksha Rath went to meet his mother to try and persuade her of her son’s genuine desire to come and learn.

She understood, and since then Ankit’s mother has not stopped him from coming, and now he is happy to join the classes without having to worry about his mother finding out.