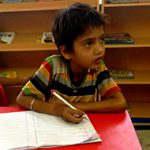 Amit’s first class in Shiksha Rath academy happened just by chance as he tagged along with his friends who were already studying here. His first visit became a second, a third and so on and so forth. He liked the classes and the teachers in the academy but the best thing he likes about the academy are the books in the library. Even though he cannot read the stories properly as of now, he loves looking at the pictures. He is always seen with a story book in his hand, whenever there is a break he would take a book, sit on the floor and spend his time going through. Amit will always come to the academy early and he will always be found near the book shelf engrossed in the book looking very serious like he has no time to waste. Earlier he used to come with a dirty face, unwashed clothes and dirty long hair. Once during a class on hygiene and clean habits the teacher taught them how to stay clean and the benefits of staying clean. That was the last day everyone saw him dirty and unruly. The next day, Amit came wearing a neat formal shirt, his hair cut and no dirt on his face. He was awarded a star for it. And since then it is no compromise for him in terms of cleanliness.

The Shiksha Rath staffs went to his parents to talk about the admission procedure informing them that Amit has cleared the entrance test for the academy and he will be admitted. However the parents said he will stop coming to the academy and they did not need take the admission. Even though the staffs wanted him to really study in the academy, as his parents were objecting they could not help but go back disappointed.

However the teachers were in for a surprise when they saw Amit in the class, as usual going through a book. When asked how he came to the academy when his parents are not letting him, he said his parents were out for work and that he came to the academy without their knowledge because he liked studying here. Seeing his determination the teachers did not stop Amit but let him come and study in the academy, not knowing what his parents will say later. So far there are no complaints from the parents and Amit is having a great time learning, playing and going through all the possible books he can get hold of in the library.